The South Campeche Ultracube™ 3D Reprocessing project comprises approximately 15,900 sq km and is located in one of Mexico’s most prominent offshore exploration areas, with several proven oil and gas discoveries.

The Gulf of Mexico (GOM) is one of the most prominent offshore exploration regions and has become known for its salt associated discoveries and mega oil finds. The GOM has a long and complex depositional history and is extensive in size, attracting explorers from around the world. Abundant salt pillows and diapirs populate the subsurface resulting in a need for thorough and modern processing sequences to obtain accurate seismic imaging. The GOM contains multiple thick source rock intervals resulting in multiple petroleum systems throughout the region. The area continues to remain one of the most successful exploration provinces despite maturity as the drive for understanding the complex area and the hunt for the large variety of undiscovered play types continues.

The new 3D Ultracube extends over 260 km in the southern part of the Campeche Bay area and provides new depth imaging of the Southern Campeche – Sigsbee Basin and also parts of the offshore Comalcalco Basin. The southern part of Mexican Ridges in the Veracruz Basin are also covered by the new South Campeche Ultracube.

75% of the South Campeche Ultracube is located in waters less than 1,000 metres in depth; with the shallowest water depth being approximately 30 metres.

Behind the Hybrid Curtain

Due to scale, sample bias and a lack of necessity, ‘hybrid’ turbiditic–contouritic sedimentary systems are only just beginning to be recognized as a significant new breed of exploration targets. Both, what can be seen on seismic (contourite influence bedforms) and what is inferred from contourite activity (winnowed turbidites yielding high net-to-gross sands in reservoir targets), is proving to be an essential tool in identifying these exciting hydrocarbon trapping systems. 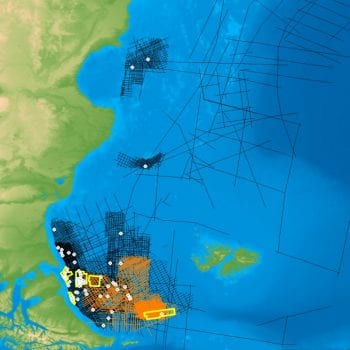