The Haere Broadband Non-Exclusive 2D Seismic Survey, in cooperation with the Department of Petroleum and Energy (DPE) and project partner BGP, comprises 19,800 km of 2D long-offset, high resolution, broadband seismic over the Gulf of Papua.

The survey is a grid of modern, high quality data that will be fundamental in assisting the re-interpretation of the geology in the Gulf of Papua, and the identification of prospective structural and stratigraphic trends that can be used for regional evaluations and future detailed seismic survey designs.

Deep grabens in the area are believed to contain extensive Mesozoic and Palaeozoic sediments, which may be associated with multiple unexplored petroleum systems, highlighting the prospectivity of the Gulf of Papua.

The offshore Gulf of Papua has a vast areal extent and at over 187,000km2, is comparable in size to the Australian state of Victoria.  It is significantly under explored with only 27 offshore exploration wells drilled, restricted to the Fly River Platform and the nearshore Aure Fold Thrust Belt areas.

The deepwater offshore Gulf has been largely ignored by industry due to paradigms around the extent of oceanic crust, presence of source and reservoir facies. An extensive regional dataset was acquired by Searcher Seismic in the Gulf between 2006 and 2018.  The Searcher Database includes 76,361km 2D data, 1,795 km2 3D data, gulf-wide shipborne gravity and magnetics data, transition zone gravity and magnetics, 75 seabed cores, 37 heatflow observation points, five dredge samples, and a full satellite slick database. All of these datasets were made available to Discover Geoscience to carry out a detailed geological and geophysical review of offshore Gulf of Papua and develop a deep understanding of the hydrocarbon prospectivity of the Gulf of Papua.

Exploratory drilling to date has focussed on the Fly River Platform and the Aure Fold Thrust Belt, with other areas of the gulf, including the Moresby Trough, Eastern Plateau, Offshore Papuan Plateau and the Coral Sea, remaining completely unexplored. The traditional play types targeted by oil and gas companies in the Gulf of Papua to date include Miocene platform carbonates and pinnacle reefs, basement related horst blocks and Pliocene basin floor fans.

Discover carried out regional seismic facies mapping as a tool for development of paleogeography maps and numerous additional play types have been identified away from the drilled nearshore and onshore areas.

Utilizing the Searcher seismic data we were able to image up to 35km depth and map a likely Moho depth horizon. The data also illuminates a distinctive Coral Sea oceanic crustal character which was mapped and compared to the areas of attenuated continental crust. It was found that the actual extent of the true oceanic crust is likely much more restricted than previous publications would suggest, with most of the Gulf and Offshore Papuan Plateau areas being underlain by attenuated continental crust. This has significant implications not only for heat flow modelling but also for the interpretation of the stratigraphy preserved between the basement and the Base Tertiary Unconformity.

Reprocessing of the PPL379 3D seismic survey has resulted in a new deeper interpretation of the basement depth which leads to interpretation of a thick section of Mesozoic fluvio-deltaic to shallow marine sediments sitting below the Base Tertiary Unconformity, known to contain source rocks in the nearshore and onshore areas.

An extensive 1D basin modelling study was conducted across the Gulf of Papua. Burial history models were constructed based on crustal thinning history and sedimentation rates determined from structural, well and seismic data.  Nine pseudo well models were thermally calibrated against present day temperature and vitrinite maturity data from six calibration wells. Results of the 1D Basin modelling indicate that Mesozoic source rocks in grabens across the Gulf of Papua began expulsion in the Early Cretaceous and suffered a hiatus during the Late Cretaceous and Tertiary uplift and erosional events, before becoming buried once again to maximum depth at present day. This modelling suggests that there is currently an active charge system throughout the grabens across the Gulf of Papua.  This conclusion is supported by the seabed coring, seep and slick data and heatflow survey results.

The Gulf of Papua has been largely ignored by industry to date due to previously entrenched paradigms of thin, cold Tertiary stratigraphy overlying oceanic crust. The results of Searcher Seismic’s Geoscience program in the Gulf of Papua all point to a prospective basin with Northwest Shelf of Australia style stratigraphy, present day hydrocarbon charge and multiple play types. 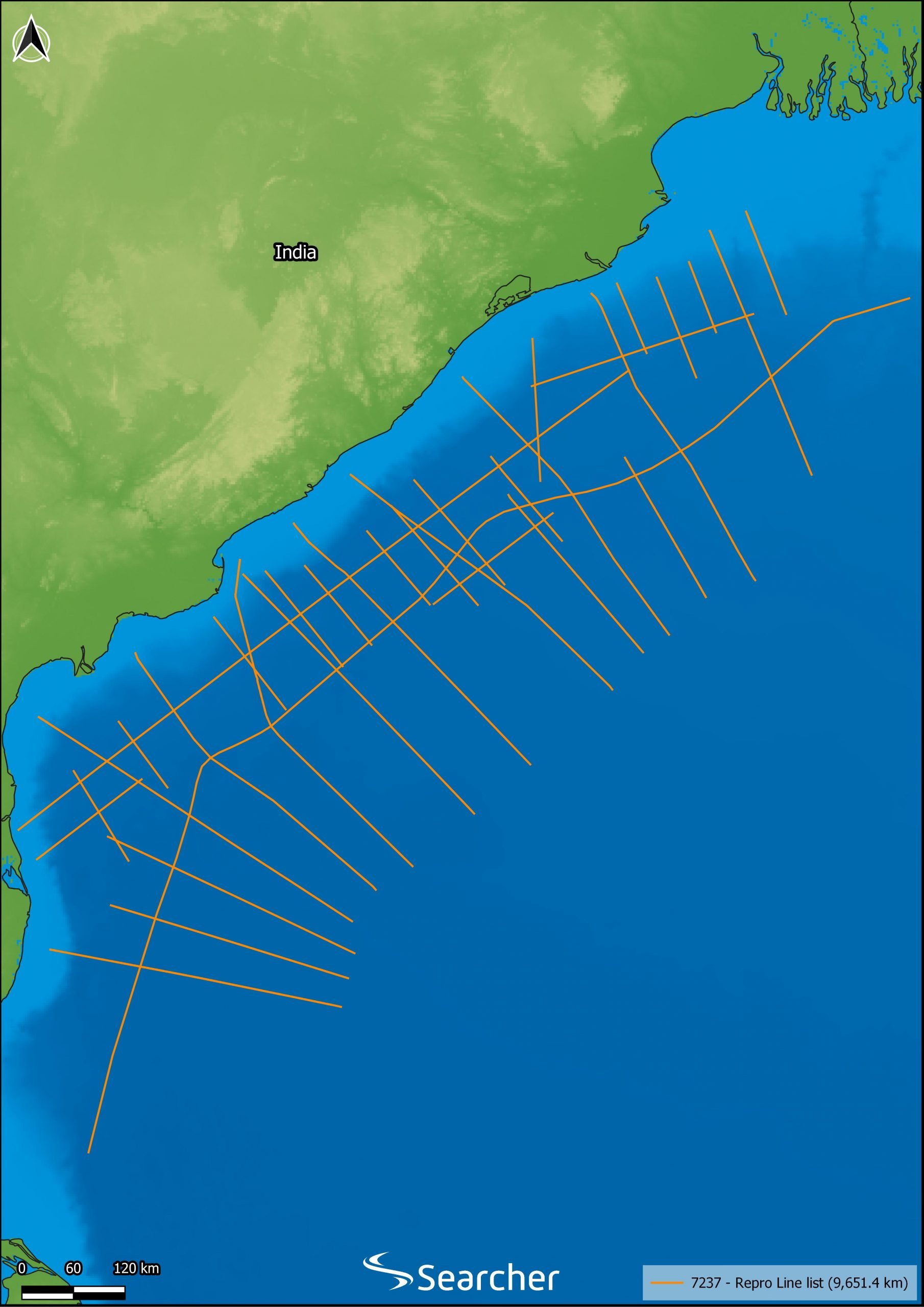 What does it mean when Bottom Simulators are Black Swans

Determining the geothermal gradient in an undrilled region has direct implications for basin modelling and remains one the largest areas of uncertainty in frontier basin exploration today. Bottom Simulating Reflectors (BSRs) occur at the base of a shallow gas hydrate layer in many of the worlds deep water basins and by calculating the geothermal gradient from the sea floor to base hydrate, quantitative and qualitative inference of the deeper heat flow can assist basin modellers in their work. However, BSRs do not always simulate the seabed and such deviant behaviour can lead them to be interpreted as ‘anything but’ the base of the gas hydrate. Yet such black swans suggest BSRs may be even more useful in mapping variations in heat flow and geotherm than we had previously recognised.